Consumer Survey: Shark fin soup tied to weddings but more than half surveyed are willing to replace with alternatives

WWF-Malaysia’s Asian City Shark Fin Consumer Survey 2015 reveals that consumption of shark fin soup is strongly tied to celebrations such as weddings (85%). The majority of consumers (57%) responded that it would be acceptable to replace shark fin soup with alternatives at weddings.

Malaysia is ranked as the world’s 9th largest producer of shark products and 3rd largest importer in volume terms (Source: Food and Agriculture Organization of the United Nations, State of the Global Market for Shark Products report, 2015). 84% of these imported shark fins are consumed domestically. The high shark fin consumption in Malaysia is the main driver of sharks being overfished. The decline of sharks in our waters will cut short the supply of seafood and also affect human survival.

“Findings from the consumer survey show that there is a high chance to reverse the present scenario of high shark fin consumption,” said Chitra Devi G, Sustainable Seafood Manager with WWF-Malaysia. “While changing behavior is most likely to be influenced by one’s own decision (32%), social media also has significant influence (30%) on why consumers stop asking for shark fins.”

“Another key finding of the survey is that shark fin soup consumers are mostly of Chinese ethnicity (76%), living in Kuala Lumpur or Petaling Jaya (91%). Interestingly, shark fin consumption is also gradually being introduced to new market segments. We believe that the reason for the perpetuity in consuming this soup is for its status symbol, and also a fallacy that it signifies the wealth and prosperity of the host,” added Chitra. 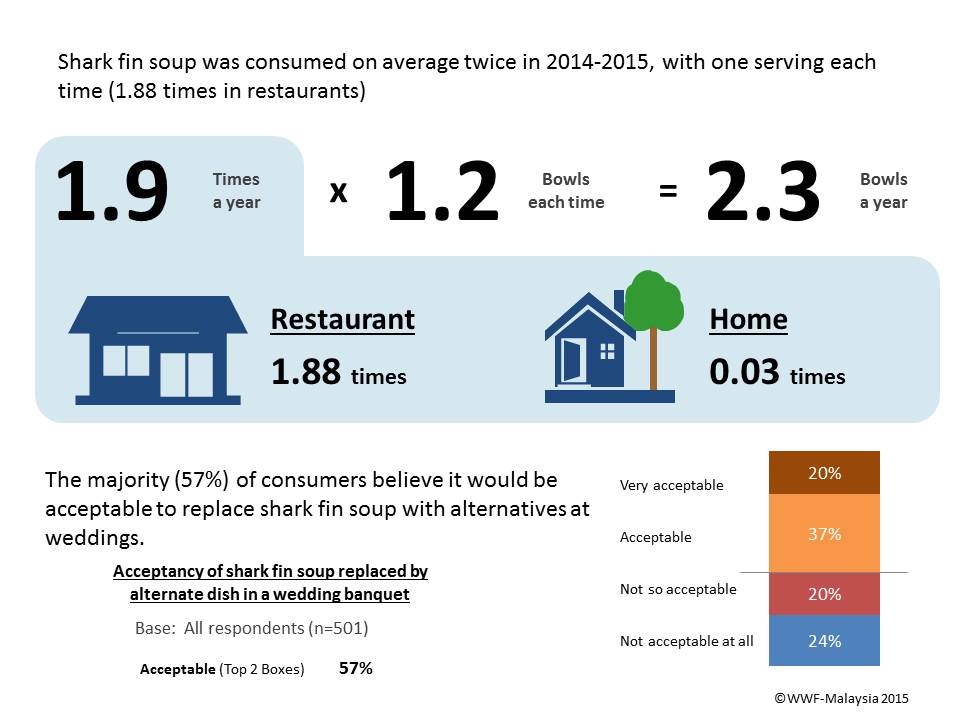 Other interesting findings of the survey are that shark fin soup consumption has decreased in the past 6 months (44% decline) and 56% expect to decrease consumption in the coming 12 months. The decrease is driven by shark protection gaining more public concern (85%), environmental concerns (65%) and a change in dining culture (55%). Meanwhile, shark fin soup was consumed on average twice in the last year, mainly in restaurants.

The tide may at last be turning as there are more signals that attitudes are changing because more people opt to not serve or eat shark fin soup. For the sake of our oceans, please give up shark fin soup. As more of us refrain from consuming shark fin soup and encourage more people to do the same, we will eventually restore shark populations to healthy levels and our oceans to their natural equilibrium.

Jonn Benedict Lu, Volunteer Leader for ‘I’m FINished with FINs’ campaign said, “Since the launch of our “I’m FINished with FINs” campaign in Malaysia 2 years ago, we knew groundswell support was evident, but no one had any idea how pervasive it was. This report is a resounding validation of the collective efforts made by many NGOs and interest groups over the years, and also a vindication for supporters who have encountered challenges along the campaign journey.”

“Many of us have had friends and family members opining ‘You may not eat, but there is no way Asians will ever stop eating shark fin soup. You are wasting your time.’ With a staggering 81% of surveyed Malaysians not having eaten shark or ray meat in the last year, and with 56% of those eating shark fin planning to decrease their consumption, I would say we have made our point, that even culturally entrenched habits and mind-sets can change. Faith in humanity restored indeed!” declared Lu. 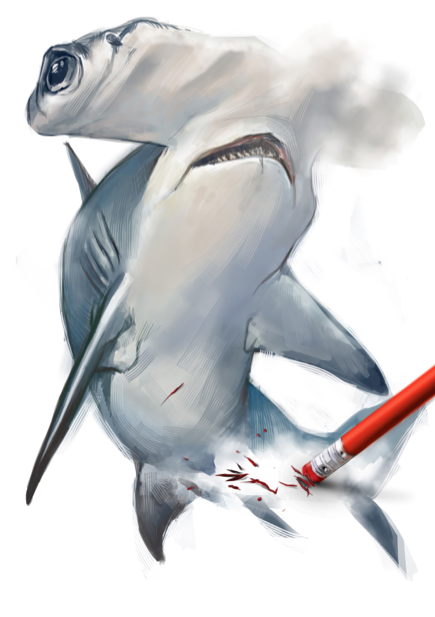 Art work depicting endangered species, including sharks like Hammerhead will be on display. © Oren

Join the My Fin My Life campaign at the “We Are All Together” (WAAT) Endangered Species Art Exhibition Tour 2016: Endangered Species Conservation, at Publika Shopping Gallery from 8 to 10 April 2016. Framed art work and art sculptures depicting endangered species, including sharks, created by over 30 local artists will be on display. One of the highlights is a life-sized hammerhead shark sculpture made of recycled materials by local artist, Louise Low, to raise awareness on saving sharks.

“We Are All Together” was first launched in early 2015 and organised by Creative Volts. This year we are collaborating with My Fin My Life campaign. WAAT is a platform built to help local artists, conservation partners to achieve one ultimate objective – Endangered Species Conservation. Everyone is sharing their resources to make things happened!” said by Abner Yap, PR & Marketing Director of Creative Volts.

WAAT is calling local artists for creative visual submissions. So far, more than 100 artworks have been collected from Malaysia, Hong Kong and Russia. Aiming to promote Malaysian art and culture, WAAT helps local artists to gain resources and to build their name (brand) from collaboration with local communities.

WAAT will be launched at 1 Utama Shopping Centre on 13 May 2016. It is the continuation of My Fin My Life activities following the launches in Penang and Kota Kinabalu. Together with Sabah Shark Protection Association (SSPA), Reef Check Malaysia, Malaysian Nature Society (MNS) Selangor, Branch Marine Group, Shark Savers and Scuba Schools International (SSI), WWF-Malaysia is running the My Fin My Life campaign from January to July 2016 to deliver the message that the demand for shark fins is threatening not only sharks but human survival. Please visit myfinmylife.com to make a pledge against shark fin consumption by breaking the soup bowl. 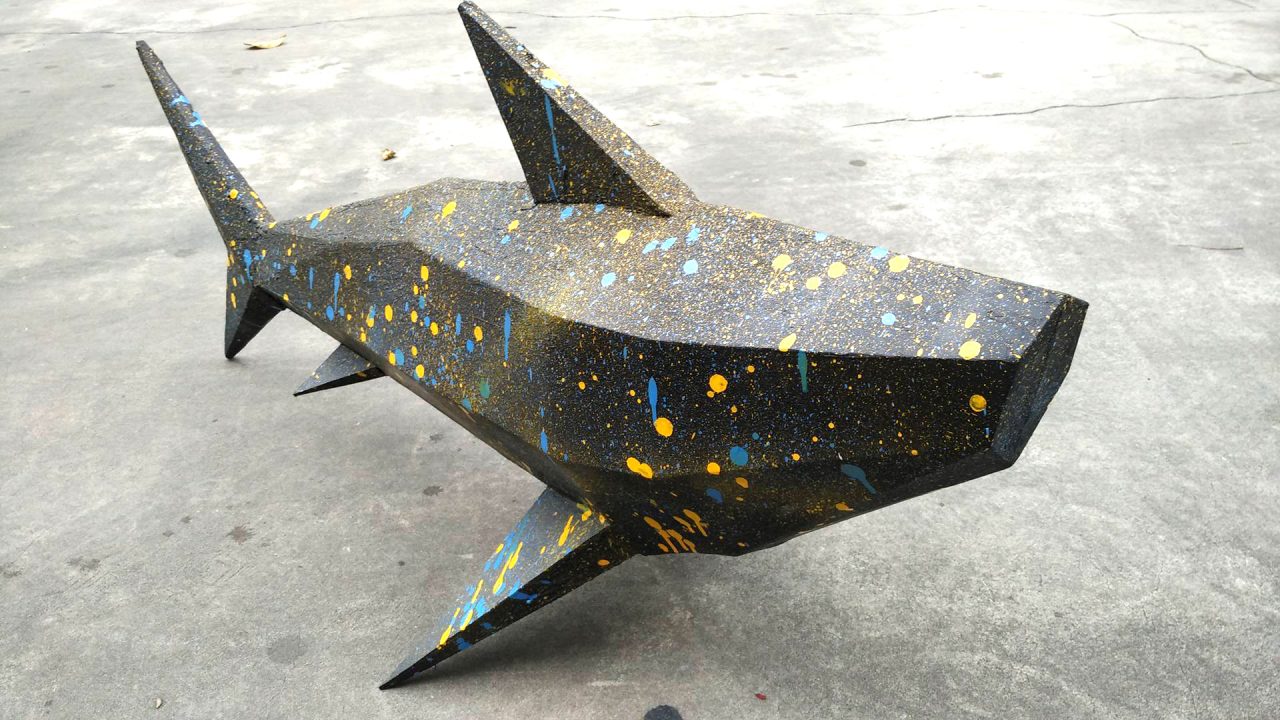 A bull shark sculpture is created by local artist to raise awareness on saving sharks.© Haikal

FOCUS is about everything from most-talked about topics as whimsical as the Candy Crush mania, personalities or celebrities to current issues that impact our daily lives.